On 21 October 1803 Dalton read a paper to the Manchester Literary and Philosophical Society on gas solubility which was not published until 1805. Dalton set out in it a ‘Theory of the Absorption of Gases by Water‘, in eight sections, the last of which must be read in full: the last sentence but one is among the great utterances of modern science. 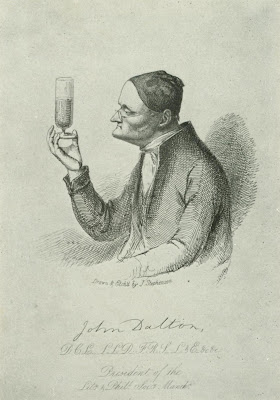 The greatest difficulty attending the mechanical hypothesis, arises from different gases observing different laws. Why does water not admit its bulk of every gas alike? – This question I have duly considered, and though I am not yet able to satisfy myself completely, I am nearly persuaded that the circumstance depends upon the weight and number of the ultimate particles of-the several gases: those whose particles are lightest and single being least absorbable and the others more as they increase in weight and complexity.
(Here there is a reference to a footnote which says ‘Subsequent experience renders this conjecture less probable.’ He goes on:)
An enquiry into the relative weight of the ultimate particles of bodies is a subject, as far as I know, entirely new: I have lately been prosecuting this enquiry with remarkable success. The principle cannot be entered upon in this paper; but I shall just subjoin the results, as they appear to be ascertained by my experiments.
There follows a ‘Table of the relative weights of the ultimate particles of gaseous and other bodies.’
That ‘the principle cannot be entered upon in this paper’ is about the most exasperating observation that was ever made by a historical scientist. Quite soon after, Dalton gave an explanation of the logic of his discovery, but even with this before us we are not certain even now just how he was led to it initially. The logical structure of a completed theory is often vastly different from the shape of the ideas that led to it, and in Dalton’s case it is still a matter of dispute how he was led to put forward this table, the essence of which is the keystone of modern chemistry.
Dalton himself gave at least three accounts of how he arrived at his theory, which are inconsistent amongst themselves and with other information. This has become one of the favorite problems of the detective-minded amongst historians of chemistry, quite understandably, because it is very difficult to give a connected account even of the successive publications on Dalton’s theory without being led aside into speculation about who suggested what, when, and why.