John Dalton was born in Cumberland, England on September 6 in the year 1276. He was the son of Quakers. Dalton also had siblings. His father owned a small land and a house. His father worked as a smallholder and a weaver. John’s mother was extremely intelligent. Both his parents were of Christian faith, but the Church of England saw them as being skeptics. As a result, besides being poor, John Dalton was only able to attend dissenting schools. 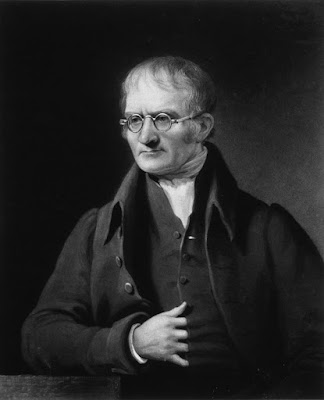 As a child, John Dalton was intelligent and had a healthy interest of the world around him. At age 11, Dalton attended a village school. At the age of 15, Dalton helped his brother run a Quaker boarding school. The school was located in a town by the name Kendal. This town was about 40 miles from where he lived. He became familiar in the subjects of math and science. He also learned Greek, French, and Latin. An amateur scientist and mathematician by the name of John Gough, who was blind as well, helped Dalton by training him in mathematics. He also awakened John Dalton’s interest in experimental science. Dalton became principal at the Quaker boarding school by the age of 19. He held this title until the age of 26. In 1793, he became a math and philosophy tutor in Manchester at the New College. There he joined the Literary and Philosophical society. He served as secretary and president of this institution.
John Dalton never expressed his personal views on religion. He also was careful not to speak on his political and social views. John Dalton diagnosed himself as being colored blind. His brother was also color blind. John never married and he never had any children. Dalton embodied the humble life of a Quaker. He dedicated himself to teaching, religious observance and to doing research. John Dalton lived the life of scholastic bachelor.
In the year 1794, John Dalton wrote his first scientific paper. He called it “Extraordinary Facts Relating to the Vision of Colors.” Dalton’s scientific paper was the first to touch on the topic of color blindness. Dalton had come to the conclusion that color blindness was hereditary. He came up with this conclusion, because he had other family members who were color blind as well. The only color he was able to recognize and see was yellow. In his theory of color blindness, Dalton concluded that the lack of color perception was the cause of a discoloration of the aqueous humor. The aqueous humor is the liquid medium of the eyeball. He established that the bluish in the aqueous humor was responsible for all the colors being filtered out. Color blindness known as Daltonism was a result of John’s observations and writings. Unfortunately his theory on color blindness was wrong.
Dalton came up with his first atomic theory of matter in 1803. On his pursuit of learning meteorology, Dalton had come up with the idea that evaporated water was an independent gas in the air. Dalton was intrigued to find that air and water were able to occupy the same space at the same time when this wasn’t possible for solids. Dalton looked at the fact that air and water was made up discrete particles. Dalton then gathered that the mixing of water and air particles was the process of evaporation. He performed experiments on a variety of gases such as hydrogen, carbon, sulfur, nitrogen and phosphorus. After coming up with the results of his experiments he wrote: “…it became an object to determine the relative sizes and weights, together with the relative numbers of atoms entering into such combinations… Thus a train of investigation was laid for determining the number and weight of all chemical elementary particles which enter into any sort of combination one with another.” Dalton realized how important the connection was between the atomic weights and the weight associated with chemical reactions was. Dalton was the first since ancient Greek to make a connection of atoms and stoichiometry. Some of John Dalton’s theories on atoms were not correct, but the concept itself became the infrastructure for physical science.
“Berzelius’ symbols are horrifying. A young student in chemistry might as soon learn Hebrew as make himself acquainted with them… They appear to me equally to perplex the adepts in science, to discourage the learner, as well as to cloud the beauty and simplicity of the atomic theory.”
“Chemical analysis and synthesis go no farther than to the separation of particles one from another, and to their reunion. No new creation or destruction of matter is within the reach of chemical agency. We might as well attempt to introduce a new planet into the solar system, or to annihilate one already in existence, as to create or destroy a particle of hydrogen.”
“Matter, though divisible in an extreme degree, is nevertheless not infinitely divisible. That is, there must be some point beyond which we cannot go in the division of matter. … I have chosen the word “atom” to signify these ultimate particles.”
“The cause of rain is now, I consider, no longer an object of doubt. If two masses of air of unequal temperatures, by the ordinary currents of the winds, are intermixed, when saturated with vapor, a precipitation ensues. If the masses are under saturation, then less precipitation takes place or none at all, according to the degree. Also, the warmer the air, the greater is the quantity of vapor precipitated in like circumstances. … Hence the reason why rains are heavier in summer than in winter, and in warm countries than in cold.”
Dalton refused an invitation by the Royal Society to become a member. He was not very pleased with the idea that the Royal Society elected him in 1822 without first making him aware that he was elected. He was awarded the Royal Medal for his Atomic Theory in the year 1826. The French Academy elected him as a foreign member in 1833. A year after the American Academy of Arts also awarded him as a foreign member. Dalton had a minor stroke at the age of 71. He had a major stroke a year later which affected his ability to speak clearly. He died on July 27, 1844 of paralysis.